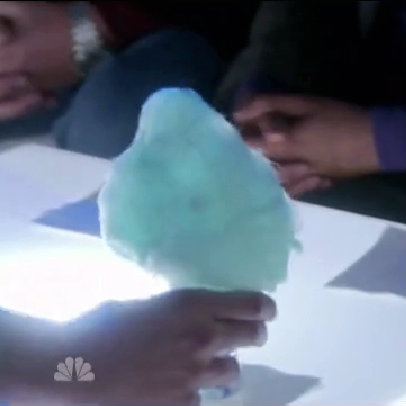 I don’t watch the show Parks and Recreation, I’m more of an action/sci-fi/cop drama gal (go Castle!), but when I was digging around for some on-screen cocktail moments in preparation for an Oscars post that never materialized, I discovered something else. Apparently last month Parks & Rec poked a bit of fun at “Molecular Mixology” and had to dig up the clip to share with all of you!

With apologies to any Parks & Rec/Geeks with Drink crossover fans, here’s the recap: A group of geeky guys are failing at giving a bachelor party and one suggests going to the new bar in town that embraces molecular mixology, described as “an experimental new way to consume alcohol”. The guys agree all alcohol is good, so they head to the bar.

Cut to me laughing my craft-cocktail guzzling butt off as the waiter sets down cotton candy “beer” and a candy apple red globe holding some sort of steam vapor martini (“may I go ahead and chisel your aroma sphere?”). The gruff looking older man of the group who had so boisterously proclaimed there was no “wrong way” to consume alcohol moments before, promptly quips “This is the wrong way to consume alcohol.” before being quite horrified by his whiskey infused hand lotion. Well played Parks & Rec. Well played.

I know it’s a joke, but I am now trying to figure out how to make beer-flavored cotton candy not sound like a horrible idea.